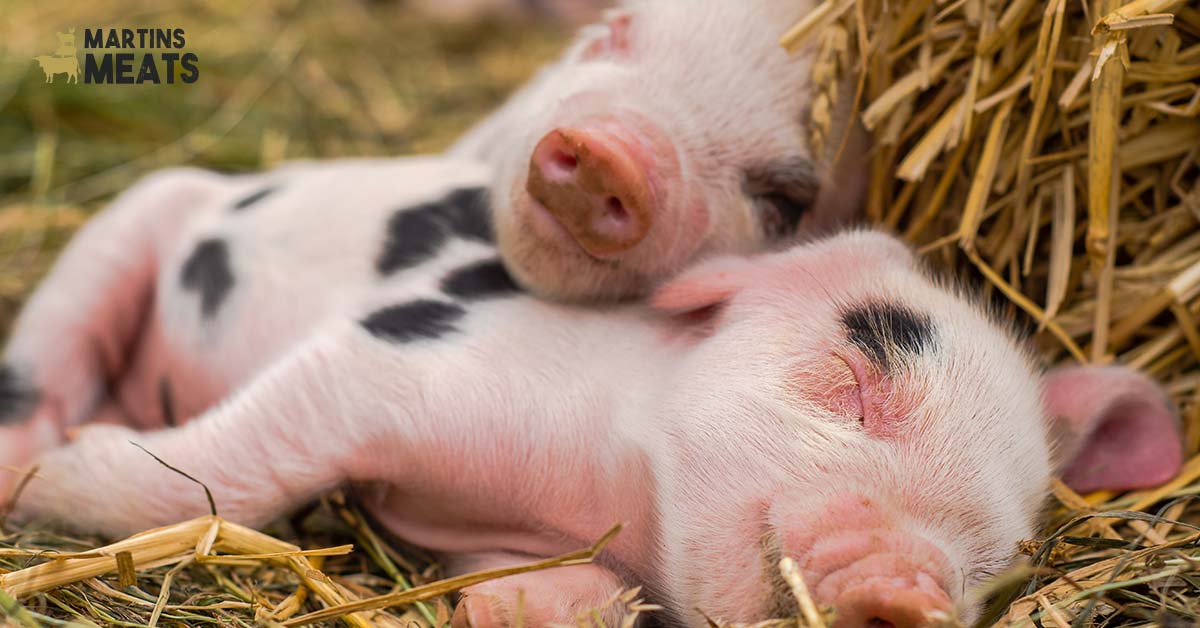 Here at Martins Meats, we ensure that all our pork is 100% free range and sourced from the rare breeds of Gloucestershire Old Spot or Middle White pigs, from farms in the North Cotswolds. The pigs are able to roam freely in a stress-free, natural environment. In keeping with this, we wanted to explore the Gloucestershire Old Spot pig in closer to detail to find out a bit more about why this joint is so juicy and full of flavour. Read on to find out more!

Gloucestershire (or Gloucester) Old Spot pigs are a historic breed of pig known for their distinctive white coats and black spots. This breed was originally developed during the 19th century in the Vale of Berkley area in Gloucestershire, and were selected as being excellent grazers and foragers. The easy-going nature of the Old Spots gave them the nicknames of “orchard pig” and “cottage pig.”

In 1913 the Gloucestershire Old Spots Breed Society was formed, placing the breed among some of the oldest spotted pig breeds known at the time. This came before the breed hit a particularly high point in its popularity in Britain just after the First World War finished, when the naturally vast proportions of tasty, lean meat retained from Old Spots were perfectly suited to the production of the streaky, lean bacon that was becoming popular at the time. However, the breed became rarer after the Second World War because the shift to more intensive forms of mass pig production caused a reduction in Britain’s interest in pigs that thrived in the outdoors.

The number of total Old Spots around has massively reduced since that point, making these breeds a rare treat for anyone lucky enough to try them!

The Old Spot breed has a distinctive look, with a white coat of hair, black spots, and big, floppy ears, making them one of the most recognisable pigs around. The following traits are ones we most associate with the Old Spot:

The flavour of the Gloucestershire Old Spot breed is renowned for being excellent. Even the British Royal Family have given their seal of approval for this breed, as they have been known to prefer Old Spot pork on their tables. This improvement in taste is likely due to differences in breeding between the Old Spot and supermarket-stored pork, with an incredibly noticeable difference in flavour between the two. No surprise there; one is raised in a natural, free-range environment, while the other couldn’t be further from this!

Martins Meats are an award-winning family butchers established in 2003 by husband and wife, Martin and Emma Gilder. Martin’s father and grandfather have been cattle farmers and dealers for many years.  Take a look at our website www.martinsmeats.com to find out more about who we are and what we do.

We don’t enter into competitions for any glory (although it is nice to win and be recognised), but we do enter because we believe it is the perfect way of showcasing our passion for our industry.  It’s also a great way to educate the public about how best practice and husbandry of animals leads directly to superior quality meat.

We go to great lengths to make sure that the farms we select our meat from, including our own, are of an exceptional standard before, during and after delivery of livestock. We are proud to state that this, combined with our understanding of meat and how to get the best from it, enables Martins Meats to recommend the best methods and recipes to maximise the flavour and tenderness of our meat and meat products.

Find out more about the individual awards here: Great Taste Awards | Taste of the West

The Best Meat for Christmas Dinner 2022

A Guide to Cooking the Perfect Steak

Health and Nutrition: What Makes Lamb So Special?

Free Range: The Incredible Benefits That Might Surprise You